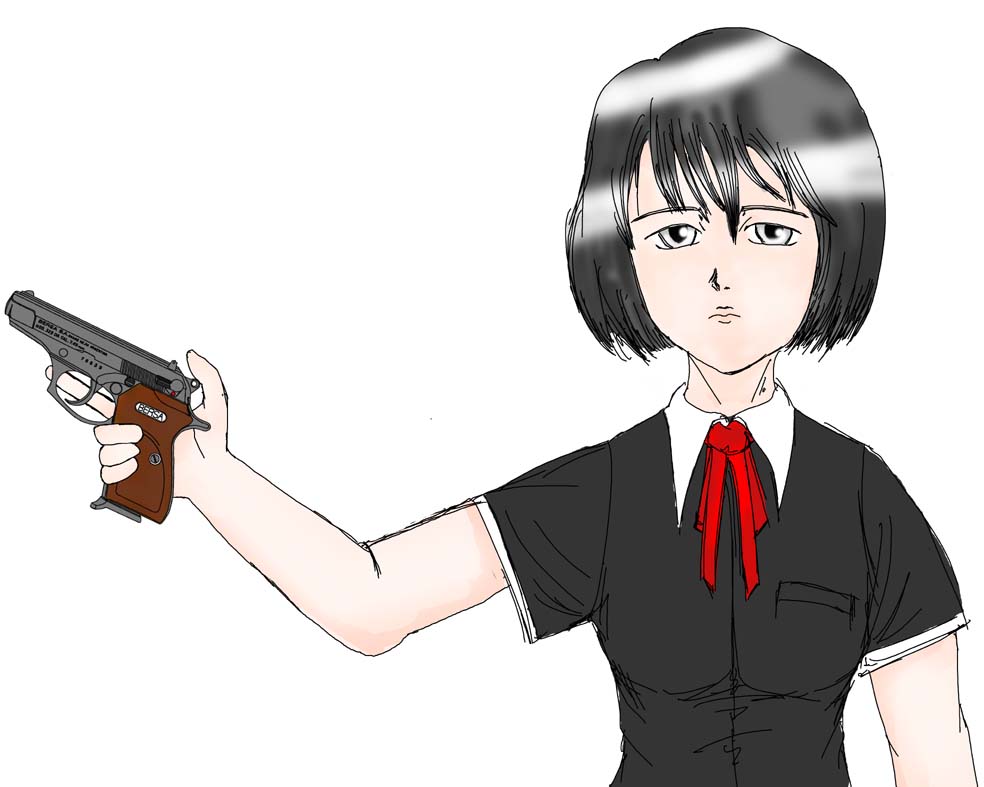 You see that look on her face? That’s the expression of someone who’s too poor to afford a Walther PPK and had to settle with a budget minded Argentine clone. The Bersa Thunder 380 takes a lot of cues from the classic Walther PPK. There are however some significant differences that not only make the Bersa Thunder 380 a distinct clone compared to other firearms of it’s kind but also what some might consider “improvements” over the original design.

The Bersa Thunder is not what I would call a sleek gun. It’s an old school cold war design with a fixed barrel and blow back operated principle. It is an all steel build making it kind of heavy compared to modern pocket pistols. Compared to the PPK, the Bersa Thunder fit and finish isn’t as nice compared to even other PPK clones. It’s also a bit larger than your typical PPK. Nevertheless, for the money, it’s one of the more attractive pistols out there, especially with a nice pair of wooden grips. I bought the combat version which comes with rubber grips as well as a couple of cosmetic changes to the original Bersa design to make it more sleek for conceal carry. While the rubber grips are nice. They do make the pistol more chunky than it already is and they don’t look as nice as the wood grips I bought for it.

When it comes to shooting however, the Bersa Thunder is possibly one of the more pleasant guns that uses a blow-back operated design. Recoil is mild and the trigger is probably one of the nicer of the pocket pistol category both in single and double action. My accuracy is on point with this particular firearm though it will suffer if I use steel case ammo. Concealing isn’t too bad either as most medium size holsters will work just fine with the Bersa Thunder. Disassembly is also very easy to do and requires no tools to perform any basic maintenance.

There’s also a lot of safety features on the Bersa Thunder compared to the PPK. Maybe perhaps a bit too much safety features. There is a frame mounted safety on the side which activates a hammer block. This makes the firearm safe to carry with one in the chamber. There’s also a gun key lock on the side of the frame that outright makes the firearm inoperable if switched to the lock position. I think this is just going to far in terms of safety but I can imagine something like that being useful if you have rowdy kids and such. More than likely they put it on there for import regulations which sucks. I am also not a fan of the magazine safety. If you don’t have a magazine in the pistol, the gun cannot fire. Luckily the magazine safety is rather simple to remove if it really bothers you that much.

Magazines can be kind of pricey if you opt for factory made magazines, though I highly recommend using Mec-Gar mags as a cheaper alternative. Their stuff is very high quality and they supply magazines for various other firearms as well. Avoid Pro-mags unless you have no options left. I had good luck with my Pro-mags but many users report quality control issues with Pro-mag stuff. I’d go with anything that is at most 8 round capacity mags as they usually have a flush fit with the frame and sometimes even have a pinky extension if your grip is too large. On a side note, there is also another model of the Bersa Thunder 380 called the Bersa Thunder 380 Plus that comes with a double stack magazine which holds 15+1 rounds which is amazing for a pocket pistol but the frame is even more chunky than the regular Bersa Thunder 380 and I have yet to see any of those models in the wild at select stores. They are also slightly more expensive at around $300-400 depending on where you look.

Based on what I have researched, the Bersa Thunder 380 is also sold in other countries outside of the US. I believe Canadians can pick one up as well as various South American countries that allow some sort of conceal carry permit. Generally, it’s not going to be a very expensive firearm to buy either and Bersa has a good reputation for quality control (although there are a few cases of some users getting defects). Their customer support line from what I heard is also pretty good too. My Bersa Thunder 380 Combat had no issues ever since I got one years ago. Reliability has flawless with no instances of failures to feed or eject. It’ll eat any kind of 380 ACP ammo and with proper cleaning and maintenance, there is no signs of rust or extreme wear with daily carry.

The Bersa Thunder 380 Combat was my first semi-automatic pocket pistol that I ever bought and it will be in service in my routine for a very long time. Sure there are more modern firearms out there with high capacities and lighter weight but the Bersa Thunder is proven enough (at least in my case) to be something that won’t let me down in any self-defense situation.