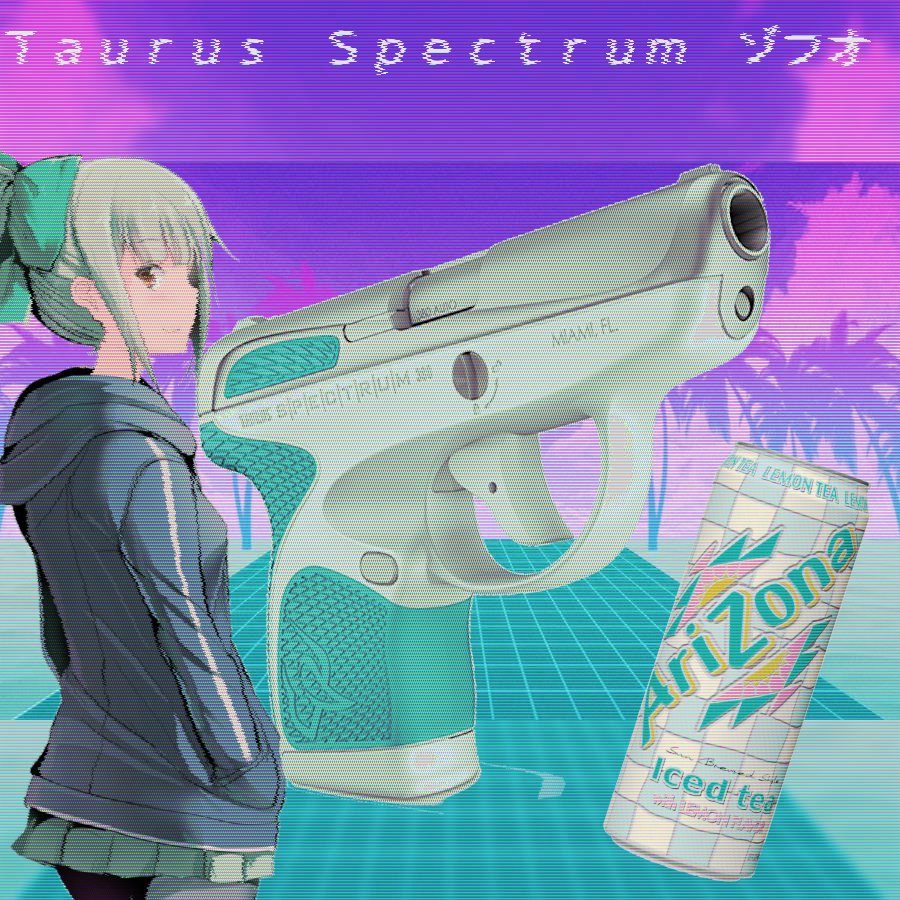 IT’S A VAPORWAVE PISTOL! Sadly a vaporware pistol too. This is honestly one of the coolest guns Taurus had ever made and it’s so unfortunate that these are now discontinued. A real shame considering once you replace the factory guide rod with a Galloway Precision stainless steel guide rod (an additional $25 upgrade) and it’s one of the most attractive (aesthetically and pratically) pocket 380s out there.

The trigger is a bit on the heavy side but then again, this is a very minimalist pocket pistol without a safety mechanism. Though this is a very tiny gun, it’s not horrible to shoot. At least with my experience. In fact, I’d describe the recoil as being rather soft for a pocket pistol. Even more soft shooting than my Bersa Thunder 380 which is a huge metal clunker compared to the Spectrum. Sights are very very small so don’t expect to be a marksman beyond self defense distances. The Spectrum comes with two magazines, one flush fit 6 rounder and a 7 rounder with a pinky extension. Pretty standard offering for a pocket pistol.

Where the Taurus Spectrum really shines is with it’s colors and design. This kind of looks like a futuristic 80s PPK pistol and they used to come in all sorts of colors ranging from standard all black, to black and red, white and pink, and even that 90s jazz cup color scheme like you see in the image above. A lot of gun magazines and bloggers mocked the design and colors of these pistols but I personally love them. I’m glad I got one for cheap (around $160) because these are kind of expensive now especially on Gunbroker (or Fuddbroker as I like to call it). Less than $200 is a really good value for this sort of pistol though these days if you can get one of these for around $200-$320 these days, I’d consider that a good buy alongside the Galloway Precision upgrade.

The reason I keep shilling for this upgrade guide rod is because it not only helps with the ease of the disassembly (which is rather easy assuming you can replace the factory guide rod) but it also helps with the reliability with the Spectrum. For starters, this is one of the Taurus guns (made in Miami surprisingly) that has a mixed consumer reliability report from what I heard. They have described this gun as being somewhat ammo picky. I think a lot of these issues had to due to with the factory guide rod as once I replaced this with the Galloway Precision one, I never had any issues with brass ammunition. It also did okay with steel ammunition (though I did have one failure to eject and had to remove the slide to remove the spent casing) though I don’t recommend using steel ammo for these kind of pocket pistols. The slide doesn’t really have serrations but rather rubber textures on the slide and grip to help with racking the slide and shooting. The one downside to this over traditional slide serrations is the possibility that if your fingers were to get sweaty, you might have some problems getting a grip on the slide as your fingers will be slipping on the rubber. I never had this happen personally but it’s something to note if you have sweaty hands.

Compared to the Ruger LCP and LCP2, it’s not going to be as popular as any of those obviously. Ruger’s LCP and LCP2 series of pocket pistols have a reputation for being one of the best in the market (There’s even a new model that takes double stack magazines). With that said, they are rather standard looking pocket pistols and they don’t have that cool factor that the Taurus Spectrum has with it’s color-schemes. If you can get a Taurus Spectrum that can at least fire self defense ammo reliably with that upgrade I mentioned earlier, this is a great alternative to the LCP that is just as comfortable to carry and probably more comfortable to shoot. I guess I could also make an autism spectrum joke here but I am not smart enough to do that. But for real though, this conceal carry piece is highly underated.