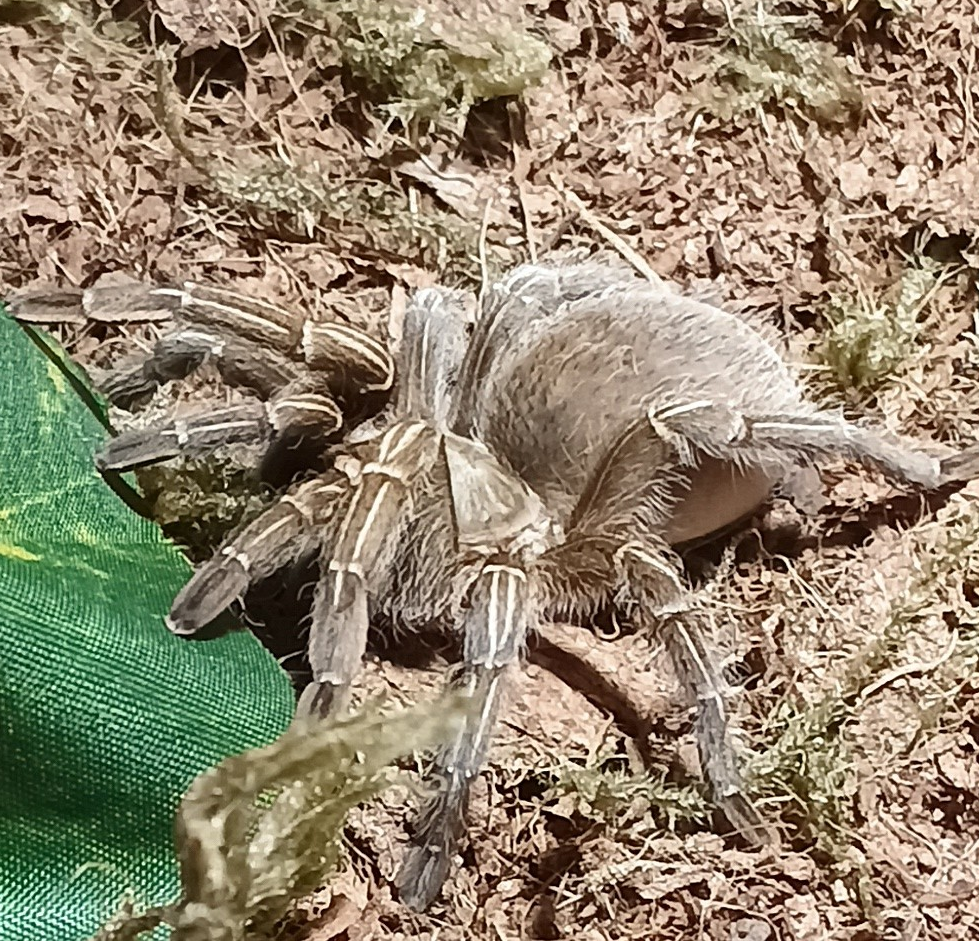 Blue Form A. seemanni after molt (Since June 2021)

My first tarantula that I adopted back in late May. At the time of writing this blog, I have yet to identify the sex of this A. seemanni, but I can determine that once it has gone through its molting stage. For the time being, my A. seemanni has no name (though I am thinking of naming it Akumu if it's a female). The reason I picked up this particular species of tarantula over the other types they also had were mainly for looks, great price, and temperature conditions in my room. I really like the brown coloration of the A. Seemanni accented with those white stripes on it's legs, giving it an appearance that I can almost describe as a skeleton. The other species that they had there (Brachypelma hamorii) was black and orange and while they are popular in the tarantula hobby, I wanted something a bit different from that species. Not to mention, they were asking $100 flat while the A. seemanni was only $25 and arguably looked more appealing and natural in my opinion.

The pet store that had this tarantula did not have the proper enclosure requirements that this species prefers. They had it in this glass box with barely any substrate (and the wrong substrate as well. Wood chippings are not recommend for any tarantula!) and no place for the tarantula to hide. Thank goodness it at least had a water bowl. A. seemanni are originally from Central America (mainly Costa Rica) primarily in semi-arid forests that get plenty of rainfall in some season to dry weather for some months. This particular species of new world tarantula is rather adaptable to various conditions, however, I believe that in order to make one thrive, the enclosure that they are to be kept in should be as close as to their natural environment as possible.

In my enclosure, I think I might have gone a little bit too large in terms of size. I had this 10 gallon tank that I had previously used for a juvenile Heterodon nasicus that had outgrown it and moved into a 20 gallon tank (more info on that snake some other time). While I didn't have to spend additional money on an enclosure, these sort of tanks are not 100% ideal for tarantulas. For starters, I have to drill some additional holes on the side of the enclosure to allow free flow circulation in this tank. This is necessary not only for the comfort of the tarantula but also for the sake of preventing a fungus or mold outbreak. Adding some springtails also helps with controlling outbreaks. Another thing that needed to be altered was the mesh lid of the enclosure. Tarantulas can climb up and hang under that mesh lid, which can cause their legs to get stuck and possibly lose them. Worst of all, there is also the risk of the spider climbing up the enclosure and falling from the top or sides which could result in the injury of the tarantula or even death! This lid will have to be replaced at some point with a fiberglass lid or perhaps even something made out of plastic with additional ventilation. That's not something I am willing to risk. With that said, I have just enough substrate for this A. seemanni to engage in one of it's more idealistic behaviors.

Quick update as of August 2021, I had made a switch to a 5.5 gallon terrarium and my A. seemanni seems a lot more comfortable in this new enclosure. Substrate is high enough where the tarantula cannot hurt herself from a fall. She had since began burrowing which is ideal for the well being of this tarantula. Like I said before, tarantulas aren't exactly a fan of big open spaces. Give them just enough to do some moving about but more importantly, give them plenty of substrate and a place to hide.

This species of tarantula is well known for its burrowing habits even as an adult. You need at least 4"-6" of substrate in order for this species of tarantula to thrive properly. At the moment, I have just enough for this A. seemanni to make a burrow but I do plan on adding more substrate until the risk of falling off the enclosure is eliminated. This means I might fill up half or more than half of the enclosure with more substrate. At the moment, I am using coconut fibre that is both dry on one side of the enclosure and moist (NOT SWAMPY) on the other end where the water bowl is located. I'll overflow this water bowl (once or twice a week) once it is dried up. You shouldn't make you enclosure for A. seemanni too wet or humid. They like moist substrate but generally also like dry substrate. It's a good idea in my opinion to give them both but don't keep the entire enclosure too dry or too wet. I also included some moss and fake plants for decoration and additional hiding spots. A medium size cork bark hide also added as a means to serve as sort of entrance to her burrow (if it does deciede to make one). To improve the substrate, I plan on using planting soil from the pet store to make the substrate more ideal for burrowing. My A. seemanni is fairly new to my enclosure and has yet to relax enough to start burrowing but from what I learned from my research is that some A. seemanni like to act terrestrial on some occasions. In any case, I think a 5 gallon (or even a smaller enclosure) would have been more logical for this kind of tarantula but if you can address the issues with larger enclosures, going big isn't always a bad thing for your tarantula. There is some talk about keeping some species of tarantulas in bio-active enclosures but generally, it's not recommeneded unless you are dealing with a species or invertibrate that benefits from high humidity (ie some species of scorpions). With A. seemani, you can do some misting but never over do it. It's more important to keep the substrate moist rather than the surface wet. Lighting is also not required for tarantulas but I do like to use a red led lamp as ambient light for the tank as they don't seem to have a problem with it. The only time I would use any lamp is a low power led lamp that will light up the enclosure just enough to see the tarantula. They are nocturnal afterall. Heating isn't necessary as they prefer room temperature. My room tends to be on the warm side anyways. If you do need some extra heat, never put a heatpad bellow the tank.

I have a kritter keeper that houses various medium to large size crickets that are given nutrients and shelter to make sure these crickets will provide enough nutrients for my tarantula. Keep in mind, tarantulas are not big eaters (especially when they are adults) so you shouldn't feed them daily. In many ways, they are similar to snakes in which they usually eat once a week if not sometimes more than a week. It's not unheard of for a tarantula to go months without eating. This is normal especially if the tarantula is due for a molt. As of this week, I was able to feed my A. seemanni a cricket and didn't notice any reluctance to eat when dropping a cricket into it's enclosure which is a good sign for A seemanni. They are generally known to be good eaters. Just keep in mind, if your tarantula is not eating, you should always remove your prey items after a while to prevent your tarantula from being stressed by unwanted company or even eaten by the prey while in a molt. When the tarantula is in a molt, you'll see it lying on it's back. Do not disturb the spider even after the molt is complete. Wait a week or two before feeding your tarantula again.

Once you get all of these essential husbandry requirements down, tarantulas (and especially A. seemannis) can be very easy pets to maintain. They don't smell, they don't need a lot of attention, and they are very docile when you leave them alone. A. seemannis are often describe as skiddish and not ideal for handling though in my opinion, you shouldn't even handle a tarantula at all. New world tarantulas "may" not bite you but they can certainly kick hairs from their abdomen which can cause some serious irritation to your skin and cause some significant damage if you inhale those hairs or get them in your eyes. Not to mention, there is a risk of killing your tarantula by dropping them if you hold them from any height. Tarantulas are kind of like most incels. They are very anti-social and hate being bothered. They would rather hide in their burrows and enjoy the peace and quiet. Tarantulas shouldn't be feared like some people like to claim (unless you are dealing with old world tarantulas; they have a nasty venom that is medically significant) but you should still respect the tarantula. A bite from a new world tarantula may not be severe or deadly, but it's still painful. It's better not to put yourself or the tarantula at risk.

Here's hoping that my A. seemanni is a female that will live for many years to come. I look forward to making my tarantula as content and healthy as possible.

My A.seemanni had molted this morning. The tarantula is now black in color which looks very beautiful. Feeding will have to be held off for a week or two before I can feed my A. seemanni. I would sex the molt but the tarantula is guarding it. I have to wait a bit before I can have access to the molt. 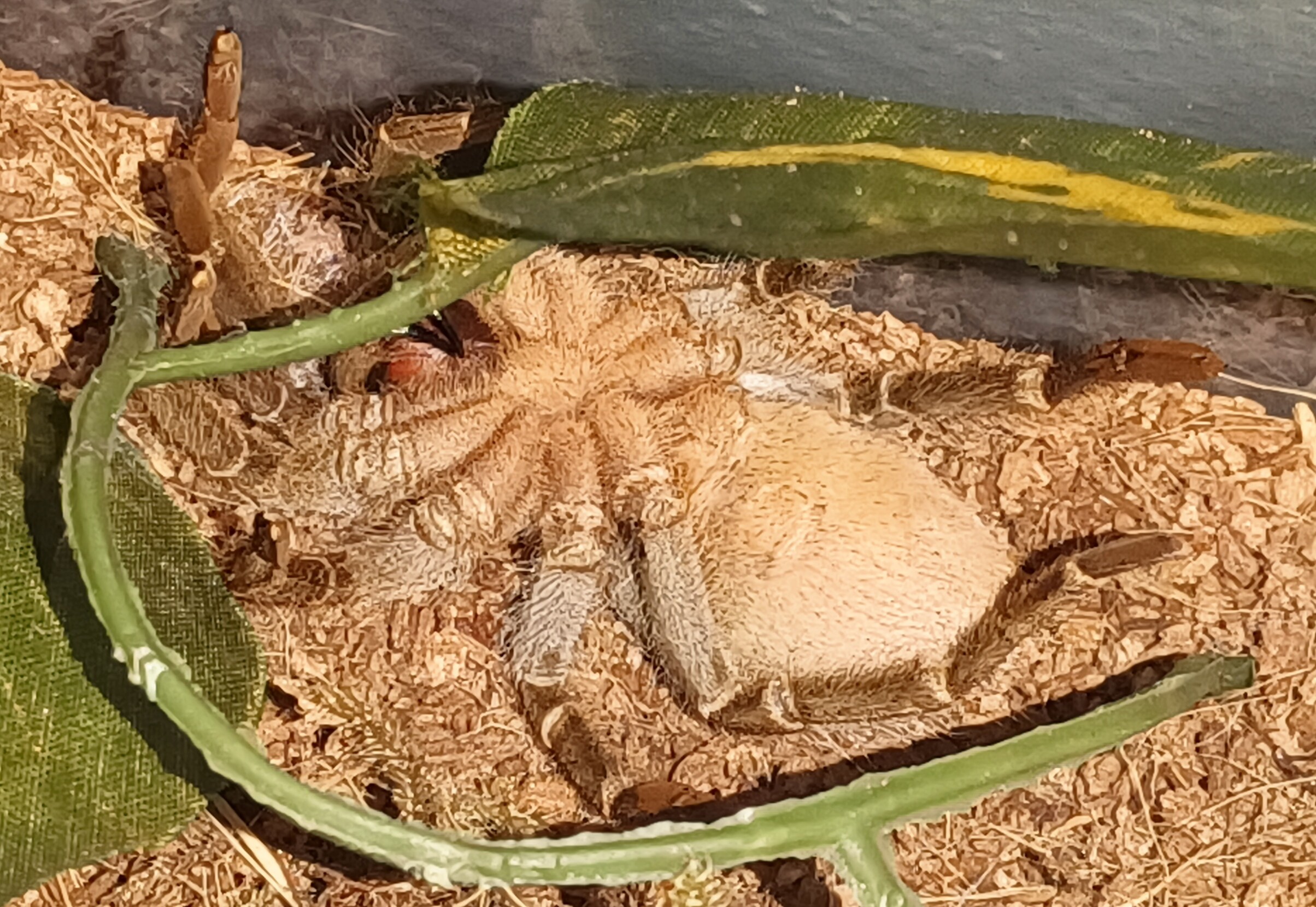 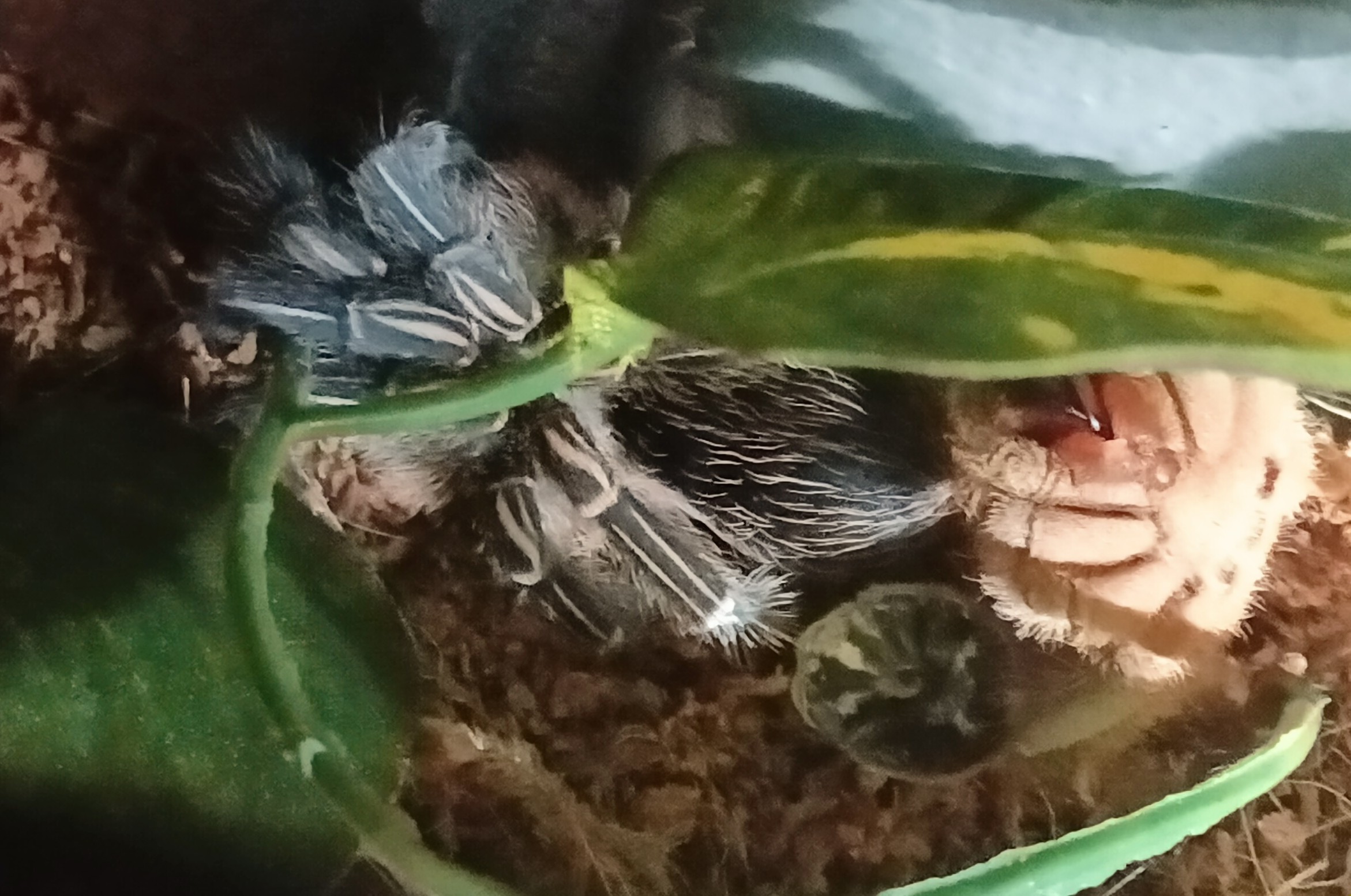 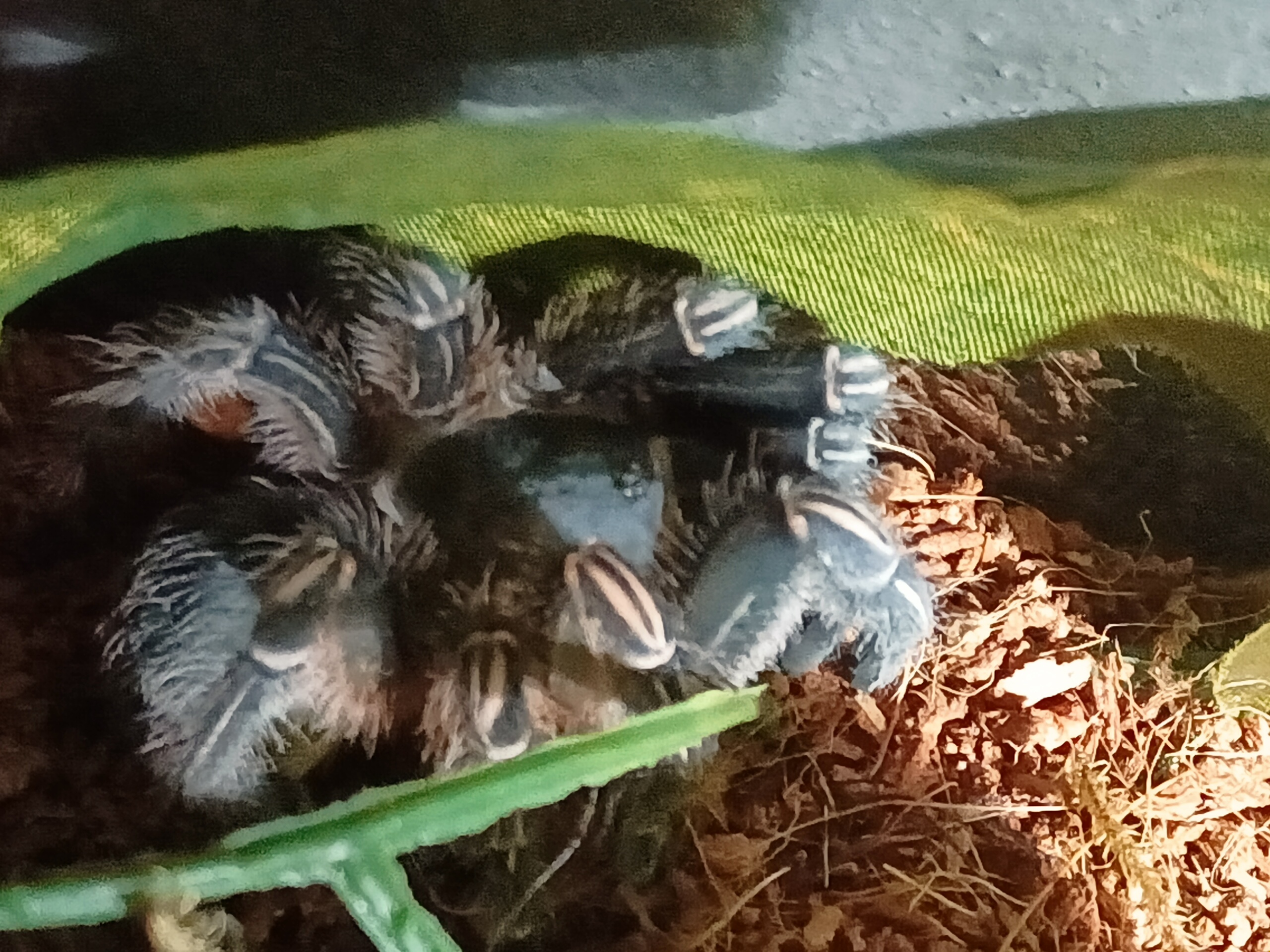 Protip: A tarantula on it's back is NOT dead/dying. This is the typical position they put themselves in before a molt. Once their molt is complete, they will need several days depending on the size of the tarantula before returning to normal behavior. Their new exoskeleton takes time to harden and they'll be very weak for a while. This also means they shouldn't have any prey items in their enclosure what so ever. Do not harrass the tarantula while or after it molts. Water is going to be extremely important for all tarantulas especially after a molt. Keep a water bowl full and clean. Damp the substrate if your particular species requires it but don't make it swampy. In all honestly, use this time to focus on other things while you wait for your tarantula to recover its strength from its molt. It will take days, weeks, and sometimes a month before a tarantula's fangs are hard enough to encourage eating again.

My A. seemanni tarantula is now very comfy in her enclosure. So much so, she began to burrow into her substrate (just as they normally do in nature). 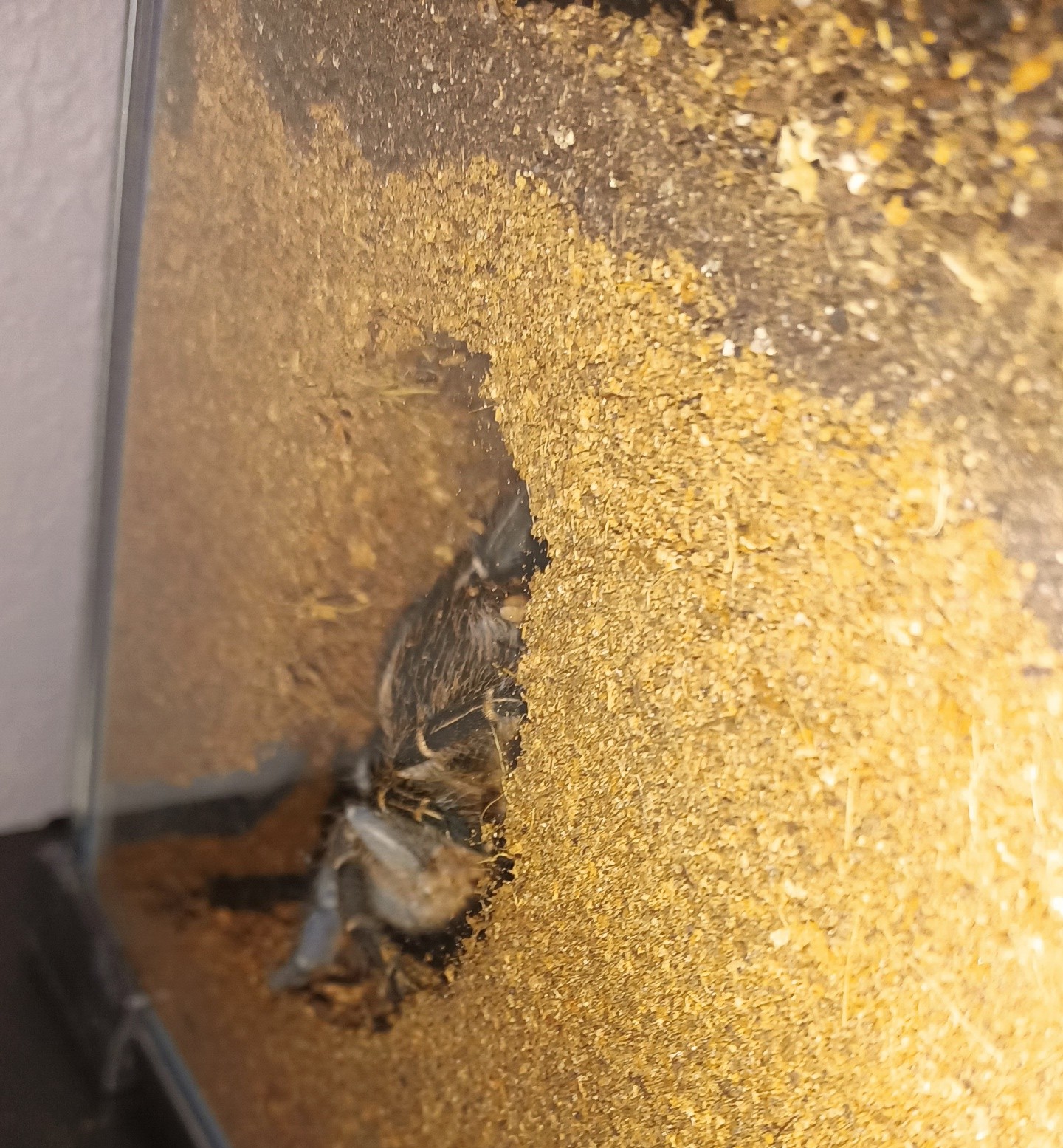 She'll ocassionally come up to the surface and "play" with her ping pong ball that I put in there for enrinchment. 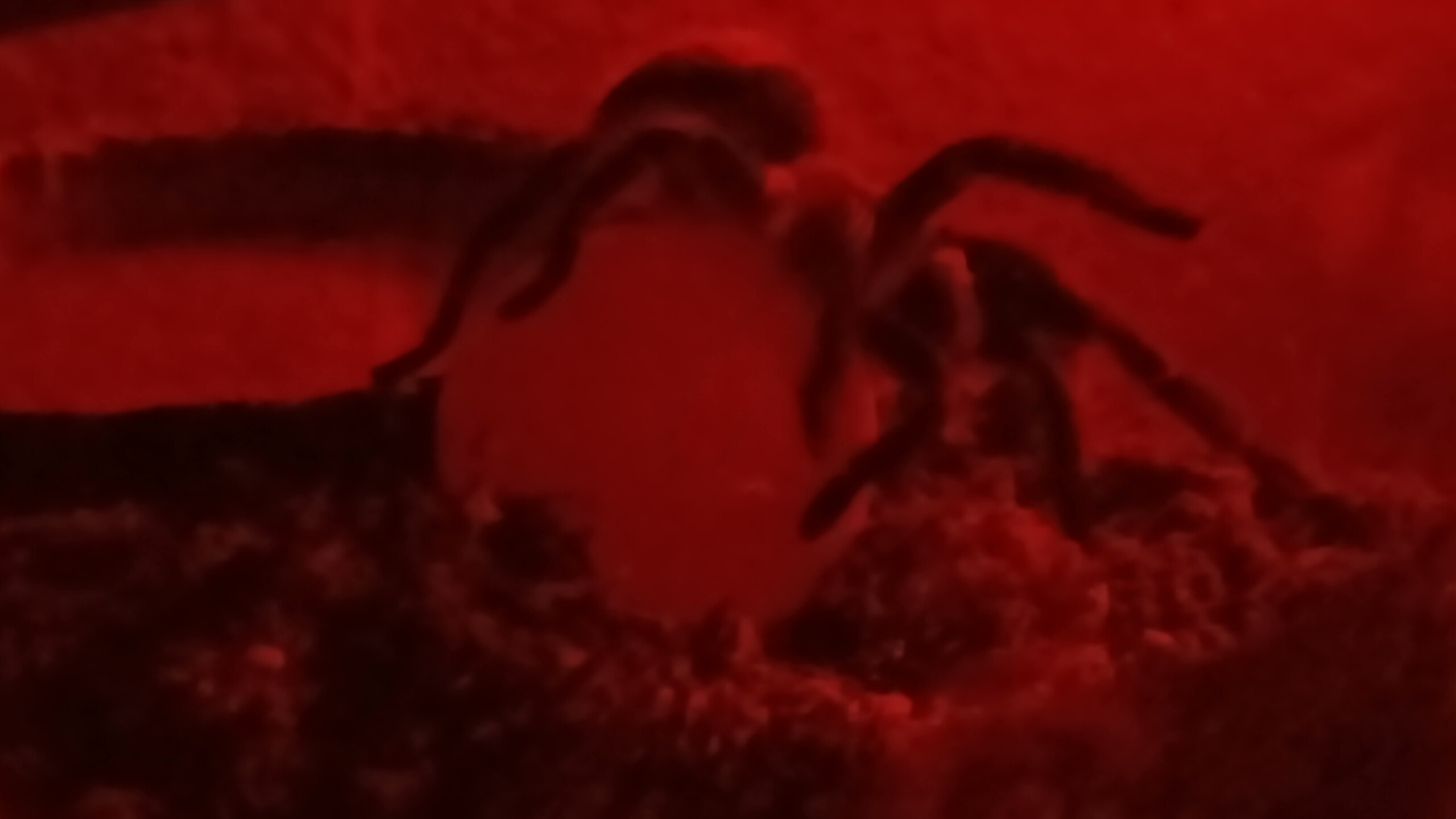 Considering her recent behavior, this is what I would consider a very good sign that I have been on top of my husbandry practices. When you provide your tarantula exactly what they need, they'll hardly require futher intervention with their enclosure.

I'll make a seperate page for feeder insects next as I am doing some experimentation on gut loading and breeding with mealworms and superworms. The care for both feeders are similiar though they have some distinct advantages and disadvantages. I still need to give it a couple month before I can confidentally explain the fact that my breeding program was a sucess or failure. Some of my meal worms have sucessfuly morphed into beetles while my superworms are still being gut loaded with veggies. More info coming soon.