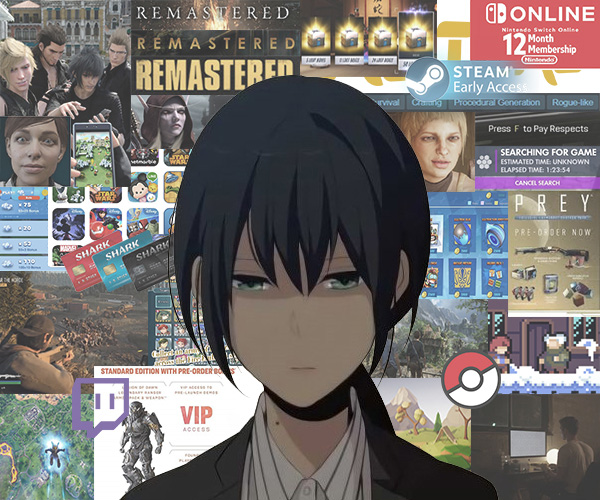 All hope is lost. For the love of God, let this E3 be mediocre at least. That probably won't be the case.

Nintendo: New Switch Model that will cost more than $300, another Smash reveal (usually they save the best reveals for E3), maybe more info on that Zelda game and hopefully Metroid.

Ubisoft: Cringe. Also "leaks" that were as of June 4 were "revealed" ahead of time to try to boost hype but let's be honest, you already know what Ubisoft does at this point. Sequel after sequel after sequel of the same tired old IPs that have been around since the 7th gen consoles!

Schedule (At least the ones worth watching hopefully)

All times are in Pacific Daylight Time.

Sony: NO PRESENTATION LMAO NO GAMES!!!

Meh. Disappointing but still miles better than the other presentations. Kazuya in smash will make my cousin happy. He's a big Tekken fan. Advance Wars Remake and New Wario Ware are very nice. Nothing new for Metroid Prime 4 but there is a new Metroid Dread (2D Metroid game) that looks okay. Not particularly excited for it but whatever. Some dlc annoucements here and there for games I don't really care for. Some new footage for the new Zelda game right the end of the Nintendo Direct along with a 2022 release date. Not really a fan of Zelda games but I'd imagine that might be something most Nintendo fans. Even more scallper game and watch shit. Not the best Nintendo direct I'd ever seen but better than some years imo. Overall, okay but not great.

Also BOOOOORRRRING but a little bit better than Ubisoft. Hardly anything exciting other than Stalker 2. Todd Howard lying for that new "Skyrim(job) in Space!", hardly any gameplay. Overall, A D- in my book. Still more games than Playstation 5! So far, this E3 has been very very boring. Not good at all! You'd think after an entire year of being locked with more time on the computer, they'd make some progress working from home. I won't cut them any slack because there was a plandemic last year. These conferences have been sub-par at best and a complete waste of time at worst. If Nintendo doesn't have an exciting conference on Tuesday, I may as well give up on modern gaming entirely. There are better hobbies to look foward to anyways.

YAAAAAAAAAAAAAAAWN. Boring. Sequels? Yep those were annouced. Addon dlc crap? Yep. Cringe? Eh...not even. Just boring. Who even plays Ubisoft crap unironically anyways? They are like a downsydrome EA. N'oubliez pas tous les accents français. Mon Dieu! BRAAAHHH AVATAR GAME NIGGA FUCK YEAH /tv/ BROS WE DID IT, MARVELCUCKS AND DCSLUTS ON SUICIDE WATCH WE DID IT CAMERON BROS! Honestly nothing. Just a movie license game that'll probably be open world like everything else Ubisoft makes. Moving on.

Nothing. Everything else sucked.

Better find a new hobby because modern gaming is dead! Literally NO games apart from a few scraps by Nintendo. Scraps! Soyny wasn't even present this year and that's because they have a new console that JUST CAME OUT LAST YEAR. This is the worst E3 I'd ever seen. I won't do another one of these again next year. What a mistake. Nintendo is doing okay but they have so much potential. Stop showing stuff that we already have info on prior to E3 (Mario Golf, Hyrule Warriors) and start showing new stuff next time. Even a sneak peak at working titles like the new Metroid Prime game would have been better. As for all the other consoles and publishers, they are dead to me. I almost feel sorry for anyone who bought a next gen console. The Xbox Series X or whatever it's called is just an Xbone 1 with 4KKK capabilities, silky smooth 15-30fps framerate, and more drm. Pisstation 5 is just a glorified paperweight with some shitty cinematic games. Switch just has ports. It's a good thing I have other hobbies and interest. I recommend anyone who's only hobby is vidya to look elsewhere and spend their money on something more rewarding: Like reading, crafting, gardening, pet keeping, music, writing, anything is better than playing the latest and lamest games. Retro gaming is still fine and here to stay at least. I thought about selling my old consoles but I might as well hang on to them if modern gaming is going to be this bad! More info