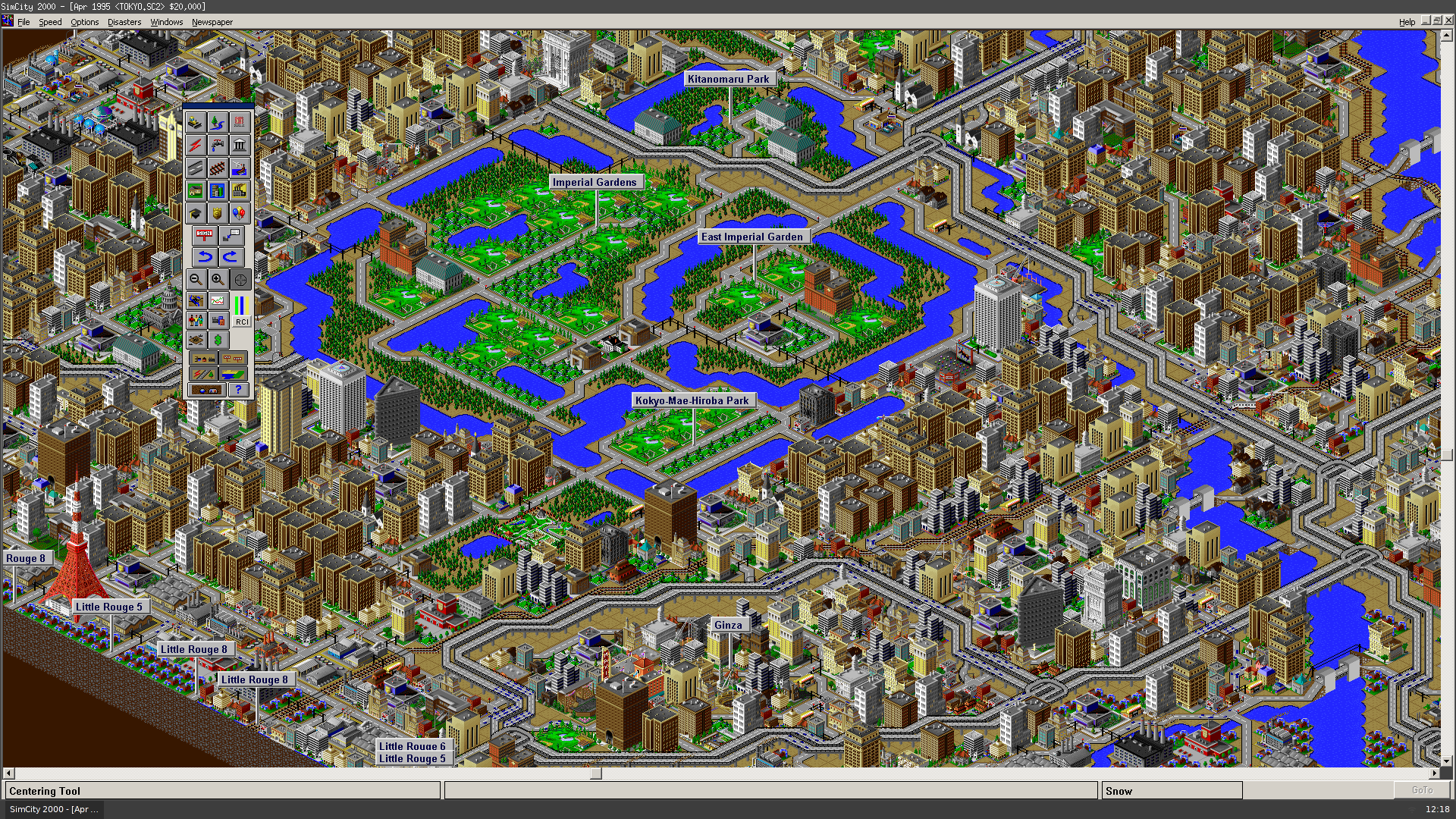 Sim City 2000 was the first Tycoon Simulation game I'd ever played. While it's not the most complex, nor is it the most simple in the Sim City franchise, it's certainly the one I have the most nostalgia for. There are many ports and versions of this particular sequel to the original Sim City classic but I'll only mention the ports I have played.

I originally played Sim City 2000 on the PlayStation and apart from the slightly long loading times, it's not a bad port of the original DOS version. The music quality is superior to that of other versions and there's even a few extras like a primitive 3D driving perspective where you get to see your city from ground level. Dated, but very cool. Gameplay is pretty much the same as the other ports. The game was clearly made for mouse controls but I was able to manage using PlayStation gamepad. I can't say for certain if I ever ran into any limitations apart from the load times, frame rate, and maybe the restricted resolution (I played this on a 4:3 aspect television) but it's really not a bad port. Considering that it introduced me to the sim management genre (or tycoon games as I like to call them), it must have done something right. Funny story with this particular game, back when I bought it, I had the choice of picking up Sim City 2000 and Final Fantasy 7 (A JRPG game that gamers like to jizz all over the place for being a classic and all that.) Suffice to say, the UFO and futuristic looking city art on the CD case won me over and I have no regrets ever since. I never like JRPGS to begin with though I am a bit more open to them lately. I still think Final Fantasy 7 is kind of overrated even for it's time.

The same cannot be said for the Super Nintendo Port of Sim City 2000. It's slow, cramped, and apart from the novelty, it's not really worth your time. Stick with the Original Sim City on the SNES or move on to another port of Sim City 2000 such as...

The DOS version of Sim City 2000 is as basic as it gets. You can easily find it for sale on sites like GOG and for the most part, this game will be configured to run via DOSBOX on modern operating systems just fine. If you want a richer experience however, I'd recommend going for the Windows 95 version of the game (which is CD based and doesn't rely on DOSBOX). Getting the 95 version of the game to run on Windows from what I heard is kind of a nightmare and you'll probably have to run a Virtual Machine or something to get it to work. That's not the case with GNU/Linux. Simply run the installer and .exe with WINE and you're good to go. I guess you could mount the CD if you want the intro cinematic and music, I don't really do that. The reason you would want to play the 95 version over the DOS version is the fact that it scales quite nicely on modern resolutions (16:9 displays), plus it has this feature where you can use tilesets to change the look of your city. Very cool. Protip: if you are running the game on wine. You'll have to click open twice when you are loading a city or tileset on the file manager interface to see the files in that particular folder. A minor issue but nothing really game breaking.

I haven't played the Saturn version of Sim City 2000 but I heard it had some unique tilesets. Otherwise I can't really comment on it. There was the Gameboy Advance version of the game that I also owned and thought was very impressive back when I played it. It was pretty cool to play that childhood classic on a portable console and it was possibly my favorite Gameboy Advance port alongside Worms World Party. But to summarize, regardless of which port you choose (save for the SNES port) Sim City 2000 is a really solid City Building game (though Sim City 3000 and 4 do make some improvements and advances if you are really looking for a more in depth sim experience). It makes me wish Maxis were still around and weren't curb stomped by Electronic Arts.